OK, so Season 3 was a stinker. We endured the highly implausible ‘loony bin’ episodes at the beginning, the endless, aimless subplots of the insanely irksome Dana and the bizarre absence of star Damian Lewis from six episodes of his own show while he languished in a Caracas slum shooting up heroin. Finally, when we were on the point of giving up altogether, our hero appeared. And was promptly executed. This is no way to reward loyal viewers so, on reading that they’re casting for a fourth season I have some advice for the producers: bring back Brodie! 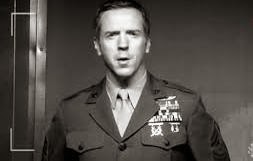 
So what if he’s dead – that didn’t stop Sherlock. Or if you insist, at this belated juncture, on a modicum of narrative integrity, you can at least bring in someone just like Brodie, someone reminiscent enough to re-engage viewers and bring comfort to poor old demented Carrie. Someone like this:


Can his agent please get in touch?

I’ve started tweeting. I had been avoiding this in the certain knowledge that such a boundless realm of gossip and trivia would fast become yet another displacement activity and I can ill afford the ones I already have, even since going into Daily Mail Sidebar-of-Shame cold turkey. But I’ve now succumbed, for the intellectually vacuous reason that everyone else is doing it and so, despite being pointless, it has become an expected norm. A bit like organic food. Question is: why?


So far I’ve identified five distinct types of ‘user’ as Twitter calls us (with no prizes for inventiveness). First are those who hold un-private private conversations which are incomprehensible to the Twitterspheric passer-by. Eavesdropping on these is like putting your ear to the wall of the Whispering Gallery – all disembodied voices and elusive content – and it’s only by tracking,  bloodhound-like, endless threads and hashtags that you are able to unearth the – invariably disappointing – meaning of it all.


This makes me vaguely uncomfortable; it’s how I used to feel on trains when fellow-travellers wittered into their cell-phones, until the Bolshevik in me decided that any conversation rammed down the ears of the proximate public was a public conversation and therefore I had a citizen’s duty to pay attention. That was before it dawned on me that the nauseating idiots thus ruining the discreet quiet of the British railway carriage actually want everyone to listen. (The clue here is that they never say, ‘Terrible day: I wrote off my Austin Metro and my girlfriend/boyfriend dumped me for George Galloway/Hazel Blears.’) So now I make sure I don’t listen as ostentatiously as possible. Holding my own competing conversation sends a clear message to this effect and I award myself extra points if my opponent stops their own chunder of incontinent boasting to listen, which they usually do when I look furtive and murmur, ‘they’ve found the bodies’. Try it – you’ll be amazed how quiet a railway carriage can get. By the time you arrive at your destination someone will have texted 999 and you’ll be marched off the platform in handcuffs, but that’s the cost of direct action and a small price to pay for defending the rights of the individual (as well as being excellent copy for your next blog).


Back to tweeting. The second type to identify and avoid is the Professional Twit, whose every contribution is composed with the sole aim of furthering a ‘career’: @martinamis OMG your latest book such incredible #vintageamis and so reminds me of my great new short story #trulymadlycreeply. Since the tower of Twitter is built on foundations of self-promotion this is at least an honest approach, but foundations are hidden for good reason: they are ugly.


Then there are those who bombard you with stuff – I’m sorry to say I unfollowed the Guardian after only two days because I was getting more tweets than the Birdman of Alcatraz.


The fourth kind are the Terrorist Twits. I haven’t identified anyone in particular yet but they must be out there: what better place to conceal an obscure message full of private references than among 400 million others?


Finally there are the celebrity lovers – the most cynical Twits of all – who exploit the prurience of the rest of us by indulging in Public Displays of Affection. So distasteful – like teenagers snoggging at the local pool, all damp and goosepimply. Except celebs do it with less sincerity, more smugness and one eye on a very different bottom line.


I have of course spent many happy hours browsing potentially juicy accounts with my finger poised over the ‘follow’ button. Boris Johnson tweets with his mayoral loo chain around his neck, which is a sad waste. I suspect he has a second, incognito stream in which he says all sorts of naughty things about David Cameron and Michael Gove and whose identity he divulges only to Spectator readers and members of the Bullingdon Club. My favourite so far is James May who tweets Haiku poems about his motorbike. James May is also a generous re-tweeter. I haven’t been re-tweeted yet, but then I’ve only ever sent one tweet. I’m going for quality, not quantity, a tactic I think the Guardian could usefully adopt. Watch this cyberspace.
Posted by Unknown at 10:49 No comments: